Yale University BA (1985), MA (1994); Middlebury College MA (1996)
Mrs. Beyreis has directed the Country Day College Counseling Program for more than a decade. She has taught sophomore and freshman English at Country Day and she advises the Scroll, the on-line student newspaper. Previously, she was Director of College Counseling at The Pingry School in Martinsville, New Jersey, and an English teacher at The Loomis Chaffee School in Windsor, CT and Newark Academy in Livingston, NJ.

LaSalle University BA (1997), Temple University, MS Ed. (2003)
Mr. McGivern has been counseling students at Country Day for a decade. He also teaches English and coaches football. Along the way he earned a master’s degree in education with a specialization in technology integration from Temple. Mr. McGivern grew up in Philadelphia, where he attended William Penn Charter, a private school he describes as “exactly like Cincinnati Country Day.” He came to Country Day from Interboro High School in Prospect Park, Pennsylvania, a Philadelphia suburb, and before that from William Penn High School in the city.

University of Cincinnati BA (1973)
Mrs. Green received her undergraduate degree in special education and certification in learning disabilities and behavior disorders from the University of Cincinnati. She taught for 27 years in the Cincinnati Public Schools. After retiring from teaching and having three children at Cincinnati Country Day School, she took the position as school receptionist and then administrative assistant for the college counseling staff. 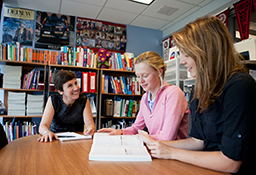