Ten Upper School students who completed internships shared their experiences during the Summer Internship Showcase. Their peers, parents, teachers and other guests heard about their work and what they learned.

"What I hear from the seniors, particularly, is that this experience is so rich for them because it allows them to work at the college level or beyond," said Paula Butler, an Upper School chemistry teacher and Internship Committee member. "In some cases, they're working at the graduate level on meaningful projects alongside college undergraduates and graduate students."

"They are sometimes doing cutting edge research where there isn't an answer to look up because they're the first people doing it," Butler said. "Their experience is very authentic, and they're often working to solve a problem that affects many other people in medicine or in engineering. They have an enormous sense of accomplishment, knowing that they're working on a challenge that could really help people."

Sometimes, internships seal their career choices. "Sometimes they end up finding out that's not what they want to do," Butler said. "That is valuable as well."

These students made presentations during the hour-long showcase:

Sam Schwartz '18 worked at the University of Cincinnati Biology Department on molecular biology, a field he may pursue in college. He worked alongside Associate Professor Daniel Buchholz and two graduate students, studying hormone levels of developing tadpoles and genetically engineering DNA to study specific hormones. "One thing I definitely learned is science does not always go as planned. There were a lot of things that went wrong."

Max DelBello '18 worked at Cincinnati Children's Hospital Medical Center in the University of Cincinnati's Department of Biomedical Informatics. He worked in the Pestian Lab, run by Dr. John Pestian and Dr. Ryan Connelly. DelBello did a baseball analysis project in which he analyzed appearances for baseball players based on exit velocity and launch angle. He analyzed the data to predict success or injuries based on video analysis of body movement/tracking. DelBello then presented his work to the Cincinnati Reds Analytics Department and continues to work on his project. "It was challenging and tough. It was all new stuff to learn and use, but it was fun. It was great that it was baseball related because that's something that I'm interested in."

Jonathan Fan '18 did an internship in photo-organic chemistry at the University of Cincinnati Chemistry Department with Department Chair Dr. Anna Gudmundsdottir and graduate student Onyinye Osisioma. They worked with aromatic compounds, more specifically the 1-azido-2-[(1E)-2-phenylethenyl]-Benzene. They used NMR (Nuclear Magnetic Resonance), UV (Ultraviolet visible spectroscopy), GC-MS (gas chromatography-mass spectrometry), and IR (Infrared spectroscopy) to test and determine their compound and its different reaction mechanism. "I learned a lot of laboratory techniques. I also learned how to get along with people."

Kaitlyn Hardesty '18 interned at the University of Cincinnati Department of Psychiatry and Behavioral Neuroscience with Assistant Professor Dr. Jenni Farrow. She researched co-morbidity of pediatric bipolar disorder and pediatric eating disorders. Hardesty worked mainly with three studies centered on patients with bipolar disorder, bipolar disorder with substance abuse and generalized anxiety disorder. She looked at records of lengthy interviews for diagnostics. She also observed central clinic patients and patients that were in ongoing studies. That included patients with bipolar disorder, generalized anxiety disorder, ADHD depression and psychosis. "I really liked seeing the patient/doctor relationships within each meeting. I learned more about the scientific research process and the literature involved with that. This is a field of study and profession that I had never considered before. Now, it's opened a lot of doorways to me."

Moya Ly '18 worked at Polar 3D, a local startup in Madisonville that manufactures 3D printers. She worked with Van Morris, community manager at Polar 3D. Much of her internship involved developing curriculum work. The first project was called Tinkering with Turbines, a two-week program that teaches students about renewable energy. "They kind of scared me when they first presented this because it was just sent to over 400 schools and it would affect over 180,000 students, but it was really valuable work. I've taught a lot of technology workshops and so I could bring that expertise into this project." The second curriculum project was called Mars Lander. With little instruction, she built the 3D object and created the entire lesson plan.

Manav Midha '19 worked in the University of Cincinnati Department of Psychiatry, mentored by Dr. Melissa DelBello and Dr. Caleb Adler. He studied whether perceived threat from facial expressions affects differential neurophysiological response in men and women, and the effects of variance in expression and gender of the facial expressions on brain activity. "I was looking for whether the different brain activity responses in men and women is a result of out-group bias (gender bias) or gender-related threat response, because male gender is the largest predictor of violence ... Several lines of evidence suggest that efforts to ameliorate negative reactions to ethnic out-groups may need to focus more on beliefs around crime, so perceived threat, and both race and gender as factors."

Madeleine Morales '18 worked at Cincinnati Children's Hospital Medical Center International Marketing and Destination Excellence, where she used her fluent Spanish frequently. She worked first in International Marketing in the Latin American unit where she developed two PowerPoint presentations and later a recommendation. She did non-clinical research to learn how the Latin American community receives social media and how that understanding of what Children'sl does affects their choice and where they choose to send their children. She then worked with Destination Excellence in another non-clinical position, working directly with patients, mostly in the Latin American unit. She'd go on rounds to check how patients were doing, made phone calls to embassies and researched how to talk to people from different cultures.

Lizzie Norwood '18 worked at the University of Cincinnati Department of Pharmacology and Systems Physiology doing medical research. She worked with Dr. Sarah Pixley, lab supervisor Tracey Hopkins and a Ph.D. student Xiao Xian An. Much of her work involved research for Xian An's Ph.D. Norwood mixed solutions and completed tasks to help medical and graduate students, and Xian An conduct their own experiments and research. "I was able to collect some data from finished experiments, and that made me feel important because the work I did is going into a medical paper." "I think the entire experience was very useful to me, getting to know the kind of environment that I want to work in in the future."

Daniel Nesbitt '18 did his internship in the UC Inorganic Chemistry Lab, working under Dr. William Connick and assisting graduate student Jessie Ringo with her research on multi-electron transfer reactions. They tried using different structures on the different sides of the metal center of the compound to see how that affects the varying chemical properties. The two compounds that Nesbitt did research on were the platinum complex and the palladium complex. "I got to see the entire research process behind making the core compounds that are all synthesized together to make the final complex. "I got valuable research experience learning about how the actual process works. I got to learn a ton of new different lab techniques that I've never even heard of, even though I had AP chemistry last year." He also learned the true distinctions among organic, inorganic, analytical and other kinds of chemistry.

Tony Wen '18 Worked in the UC Neuroscience and Psychiatry Department under Drs. Melissa DelBello, Luis Patino and Fabiano Nery, as well as Thomas Blom. The topic of his study was the relationship between the brain activation level and bipolar patients. "My internship was different from other people in that I did tons of stats analysis, so I'm using my SAS and SSTS." He found that baseline right amygdala activation was only associated with symptomatic recovery for the highest level of attentional demand. Wen also watched several FMRI scans on real patients and saw four bipolar patients while shadowing Dr. DelBello. "I saw how they try to have a normal conversation with bipolar patients to get information about how severe their symptoms are, when their mood is so high or depressed." 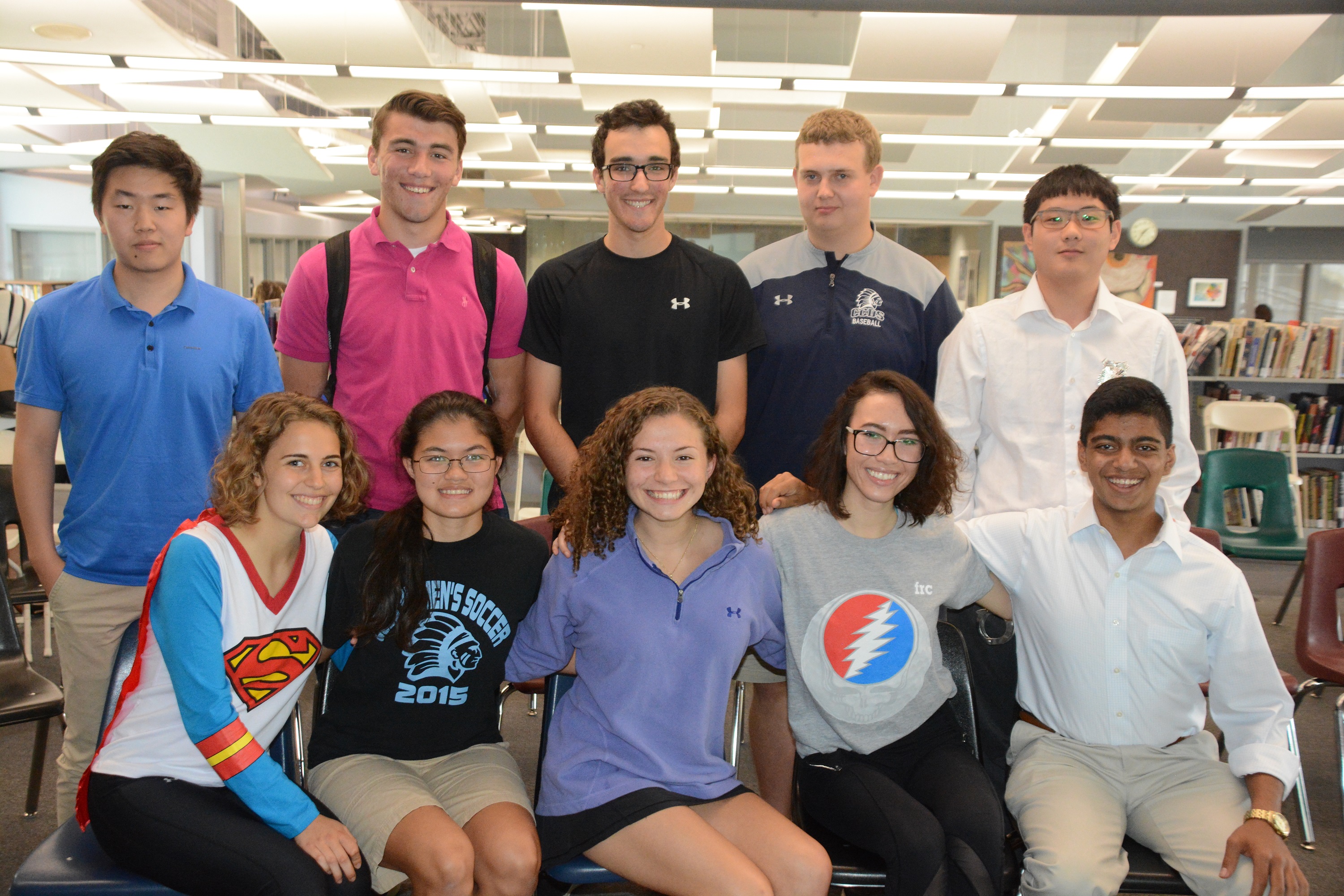