CCDS Varsity Swim: It's been an exciting stretch for the swimming and diving team! Camille Huxol came in second in the district diving competition (after winning sectionals) and is headed up to state in Canton next Wednesday morning. We had a massive meet at the sectional swim championships in Mason this past weekend. The following events moved on to districts:

Qualifiers will compete on Friday at Miami University in Oxford, and we hope to send some on to state in Canton! 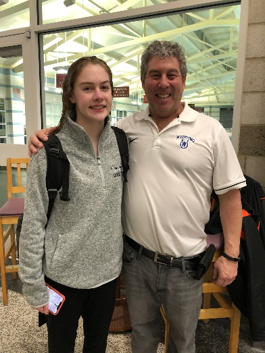 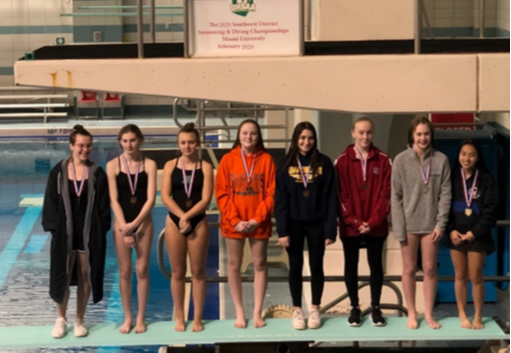 CCDS Varsity Wrestling: CCDS wrestling took a weekend off from competition to put "Virtue in Action." We volunteered at Saturday Hoops, a part of the Cincinnati Youth Collaborative, to spend the morning with school-aged children one-on-one. The program's focus is to build an upward trajectory for life by encouraging students to be cheerful givers, hard workers, overcomers, and stewards of their gifts. Wrestlers connected with children through basketball, soccer, jumping rope, making crafts, reading, and circuit training. We are back on the mat tonight, Wednesday, Feb 12 for a dual with North College Hill and Friday, Feb 14 for the MVC Championships hosted by Norwood High School.

CCDS Varsity Gymnastics: On Tuesday, February 4, the gymnastics team took second place of five in a home meet. The team lost to Turpin, but defeated Kings, Seven Hills, and Clark scoring 121.55. Jasmine Gonzales finished third on bars and second on all-around. Cate Collett took fifth on beam and all-around. The team competed in the Turpin Invitational on Sunday, February 9, finishing sixth out of 10 schools. For the third meet in a row, the team scored above 120 with a tally of 122.65. Gonzales placed sixth on bars and fifth on beam and all-around. The team continues to beat all the smaller schools, along with a number of division one schools. The team closes out the regular season with the City Championships at Country Day on Saturday, February 15. On the 22nd, the girls will compete in the Division one District Championships at Lakota East High School.

CCDS Varsity Girls Basketball: The womens basketball team ended the regular season 20-2 and have been named MVC conference champions for the second year in a row. Last week, the womens basketball team honored its two seniors, Lawson Renie and Lilly Reisenfeld during the season's last home game against North College Hill. CCDS won 63-30 with Kam Jordan scoring 25 points, and senior Lawson Renie scoring 16 points. Not only did this win clinch the MVC conference title, but it was Head Coach John Snell's 300th win! John became the head coach of the womens basketball team in 2005 and has contributed tremendously to the success of the program. CCDS will enter the state tournament as a #1 seed in the district, and they will play their first game versus Oyler High School on Saturday, February 15 at 3:30pm at Monroe High School.

With wins over rival 7 Hills on Tuesday and New Miami on Friday, the team clinched the Miami Valley Conference Gray Division Championship. This is the team's first MVC Championship since 2015. The team received the #4 overall seed in the Division III OHSAA State Tournament out of 18 schools.

Head Coach Greg Ross said, " This season has been very special, and this group of young men have bought into playing the right way in practice and it carries over to the games. The boys play hard, they share the ball on offense, they are coachable, and they play the game with passion. The most important thing to me is not their play on the floor but it is their CHARACTER. The way these young men carry themselves daily by doing the right thing in the classroom, school hallways, at basketball, and in public is what I care about. Yes, the wins are great and winning the MVC Championship is awesome but knowing that I am preparing these players for life after basketball is more important. Teaching them respect, responsibility, the value of hard work, having integrity, and showing compassion to others is my #1 job and will lead them to becoming good husbands and fathers and valued members of society. I am blessed that I work with such great kids and families at Cincinnati Country Day School."

This week the team travels to Miami Valley Christian Academy on Friday night and they will wrap up the regular season on Saturday at home vs. Williamsburg for senior night. We will be recognizing our two seniors Matthew Adkins and Bryan Gan before the game.

The middle school gymnastics team finished up a successful season at Anderson Invitational. Allison Ramage placed second on beam, first on floor, and first all-around. Gracie Mitchell placed 4th on beam and first on floor. Many other gymnasts scored their personal best times to earn a 4th grade team finish. The Anderson Invitational helped Coach Conner and the team top off an already great season. We look forward to seeing how these athletes continue to grow next year.

The middles school swim team has dominated the season and finished first in almost every meet this season against other small school like CCDS and against some programs two to three times in size. The team finished up their seasons at the Cities Championships held at Princeton High School. Even with this year's team being one of our largest in recent history, we were able to only field entries in 18 of the 30 events, placing us at a disadvantage. In the 18 events with CCDS entries, our swimmers earned one 3rd place finish, nine 2nd place finishes, and an incredible thirteen 1st place finishes. Many other swimmers posted their personal best times to earn CCDS points in places 4th-8th and without their points CCDS would not have been able to compete against the division's other 11 schools. When the results were posted, CCDS boys placed 7th, CCDS girls took first place, and as a full team the beat out Indian Hill by 49 points to be named City Champions. For most of the 8th graders, this meant back-to-back titles for CCDS. In a year were records were broken and swimmers' times dropped with each practice and meet, it was in true Country Day spirit that they won the championships with points earned across the roster from the most experienced swimmers to the first-year swimmer. CCDS Pride!

The youth wrestling program completed their 11th week training clinic last week. Fourteen K-6th grade athletes participated in the weekly clinic organized by varsity coach Dan Wood. The varsity wrestlers along with some help from middle school wrestlers and coaches worked with each wrestler to teach them some basic wrestling techniques and knowledge needed to compete in the sport of wrestling. The coaches were excited by the dedication from these young athletes and how quickly they grew and improved their skills each week. We are hopeful that many of these athletes will continue their work and become leaders in our middle and high school programs in future years. The youth, middle school, and high school wrestlers ended their season with a special lunch together to solidify the bond in our program that is strong among our youngest to our oldest wrestlers.

The youth cheer program had a busy winter supporting the youth basketball teams on the weekends. The cheer squad was made up of 19 first through fourth graders. The girls have spent many Saturdays practicing their routines followed by performing them at youth basketball games on the same day. Their tireless dedication and hard work have raised the CCDS pride level and have helped create a positive atmosphere during games. Their consistently fun and spirited cheers help surge our teams on to victory. Coaches Wall, DalleMolle, and Smith are proud of the progress the girls have made over the winter and the team spirit they bring to their practices and performances each week. GO CCDS!

VOTE for our three athletes up for athlete of the week this week. Vote by Friday.

Sam Pettengill won the 50 freestyle at the Division II OHSAA Mason sectional swimming and diving meet, helping CCDS to a seventh-place finish as a team.