Manav Midha '19, founder of Study-Jump-Smile Cincinnati, was one of five senior finalists for the American Jewish Committee's Simon Lazarus, Jr., Human Relations Award. He was honored last month during an award ceremony at Rockdale Temple.

Study-Jump-Smile is a student-driven tutoring program run by CCDS Upper and Middle School students. They provide free tutoring to Cincinnati Public School students every Sunday afternoon, except holidays, at CCDS during the school year.

"This is Manav – enormously talented and engaged, possessed of all kinds of ideas about what to do with his skills, ready to join a friend's project or draw other students into one of his own," wrote CCDS Academic Dean and Director of College Counseling Sarah Beyreis, who nominated him.

Manav is two-year co-captain of the CCDS tennis team, co-president on the Model U.N. Club and kept the Political Roundtable club alive for four years. After three summers of a research assistantship in a psychiatry lab at the University of Cincinnati, Manav is first author on a scientific paper now under review for publication.

"Outside of school, he has risen to significant roles in organizations that serve forgotten kids," Beyreis wrote. Those organizations include Siblings with a Mission, which organizes a summer conference at Cincinnati Children's Hospital Medical Center for siblings of children with severe illnesses, and the iBelieve Foundation, which conducts summer camps for middle school students in Ohio's Appalachian region.

Since 1965, the American Jewish Committee (AJC) has recognized outstanding Greater Cincinnati high school public, private and parochial school students whose daily lives, activities and behavior exemplify a concern for others and a desire to bring about better human relations in their schools, their communities or in their personal lives with the Simon Lazarus, Jr., Human Relations Awards.

Cincinnati Country Day School has several connections to the AJC organization and the awards. The late Simon Lazarus, Jr. was a cousin of alumnus Steve Lazarus '81, parent of Allison '10, Meg '13, Sam '22 and Gertrude '27. He's also a member of the CCDS Board of Trustees.

Seth Schwartz is the president of AJC Cincinnati. He and his wife, Susanna '93 Gest Hinkle Schwartz, are parents of Leah '27 and Hannah '29. 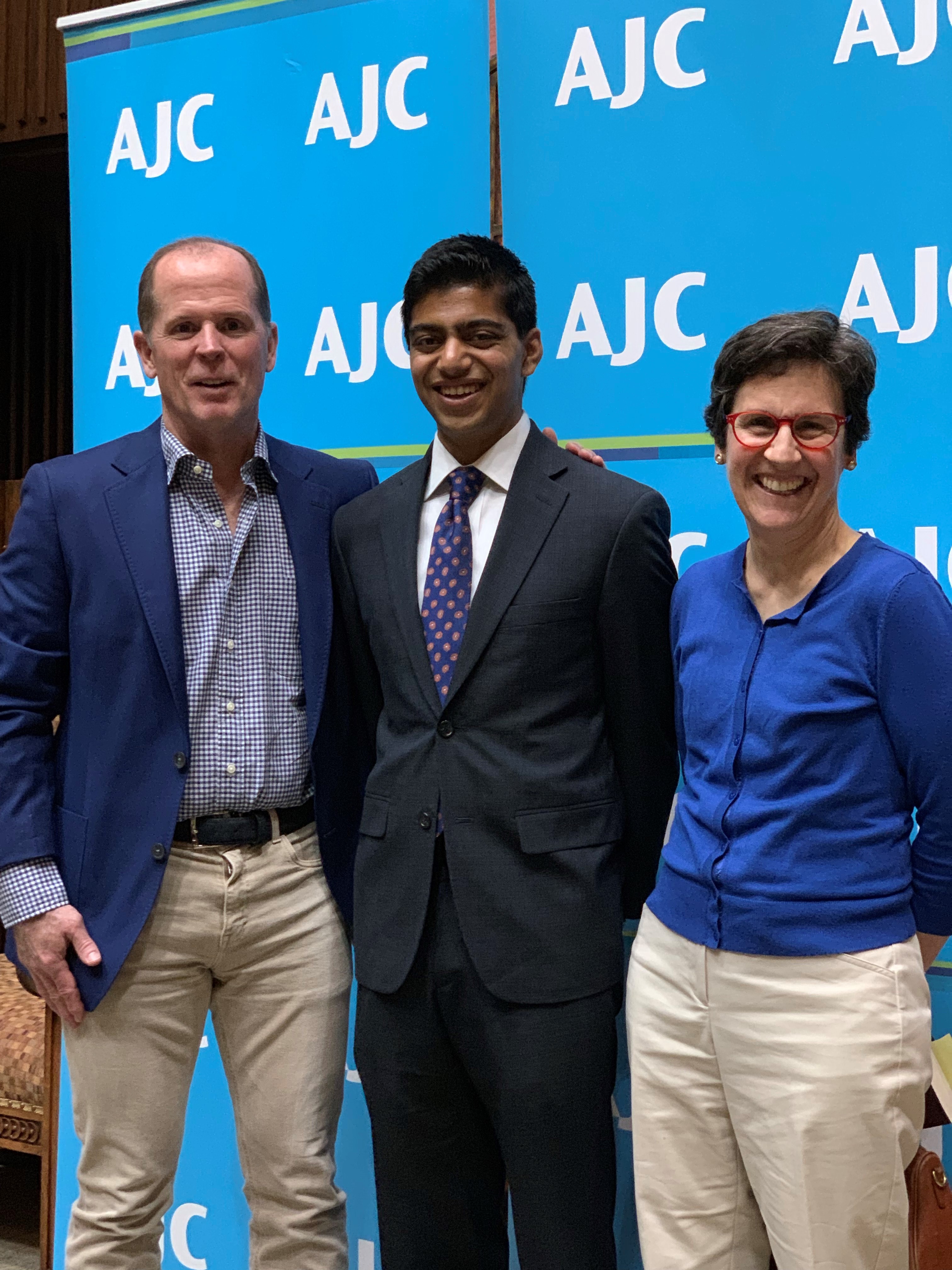 From left, Mark Knue, a former Country Day trustee and parent of three graduates, who provides transportation for CPS students to tutoring sessions, senior Manav Midha, and Academic Dean and Director of College Counseling Sarah Beyreis, who nominated Manav for the Lazarus Award. 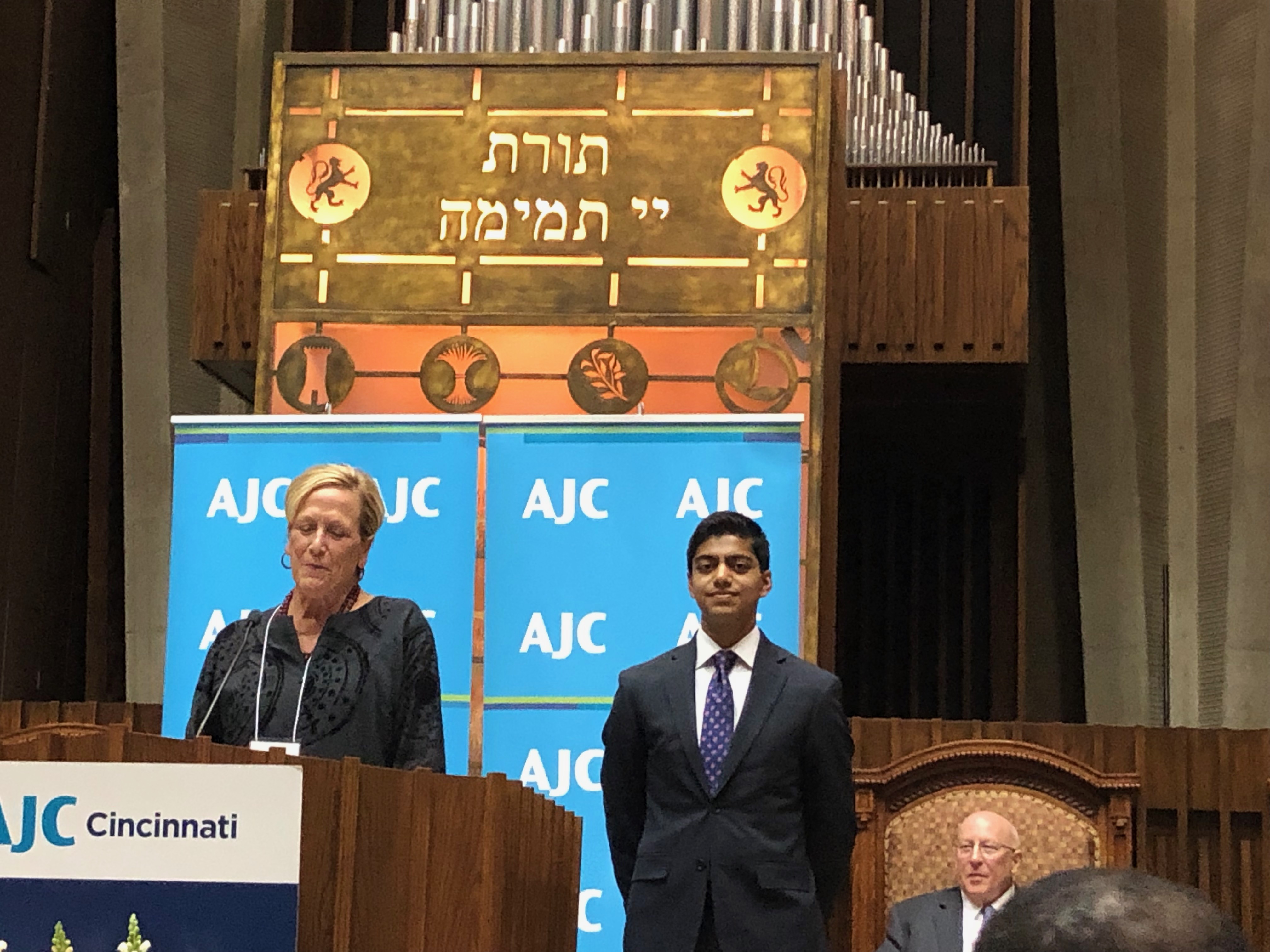 Barbara Perez, President/CEO of YWCA Greater Cincinnati, one of the award judges, introduces Manav at the awards ceremony.