"It was so impressive to see the scope and depth of many of our students' projects," said Paula Butler, Upper School chemistry teacher. "Their presentations showed how they applied their knowledge to tackle interesting challenges—often ones for which there were no immediately known answers."

"Our students found it very different from their regular "survey" classes at school; in the summer, they learned to delve into one or two small aspects of a larger research puzzle—figuring things out for themselves as they worked along with graduate students and professors on topics of interest," Butler said.

These students made presentations to an audience of their peers and teachers during the hour-long showcase: 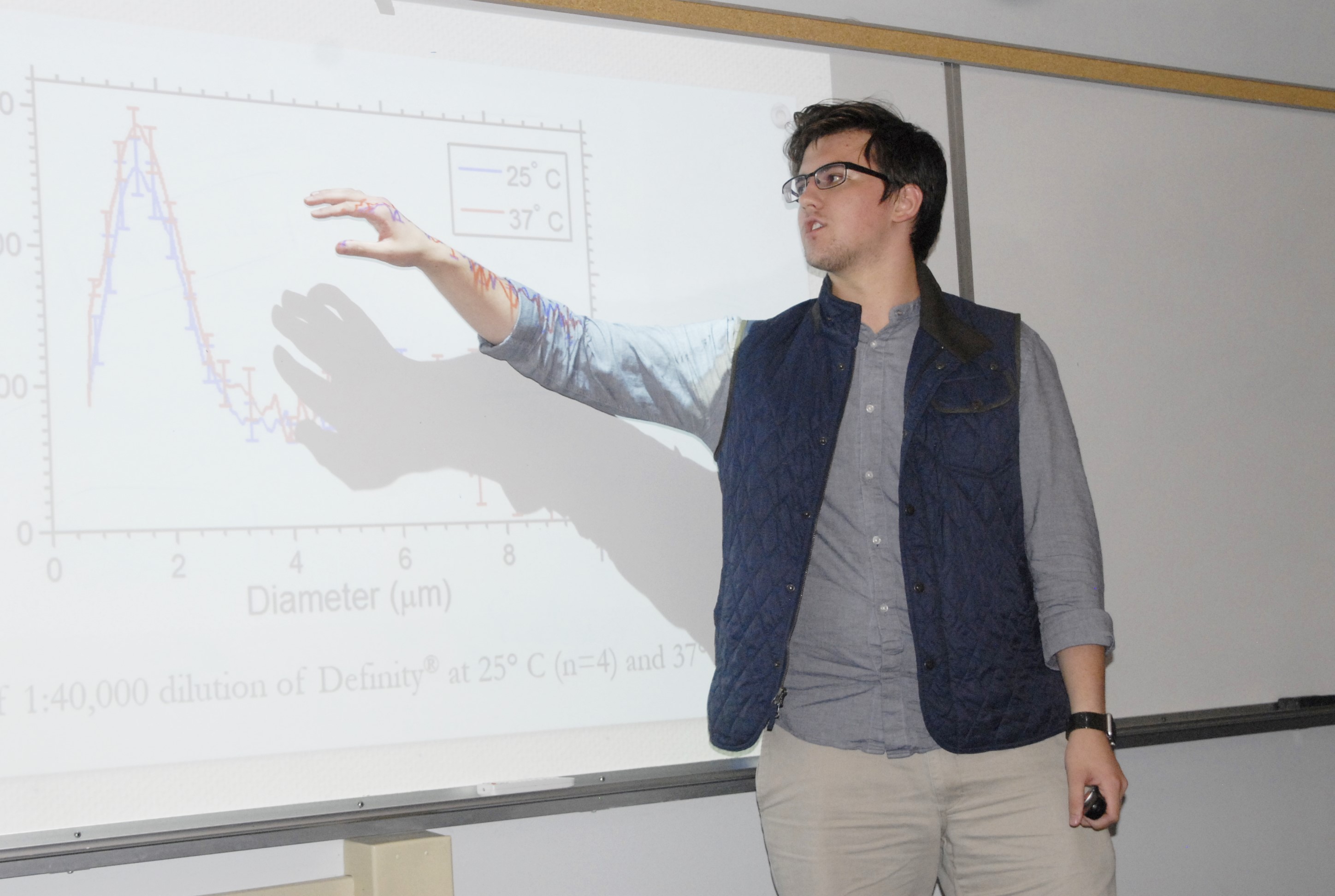 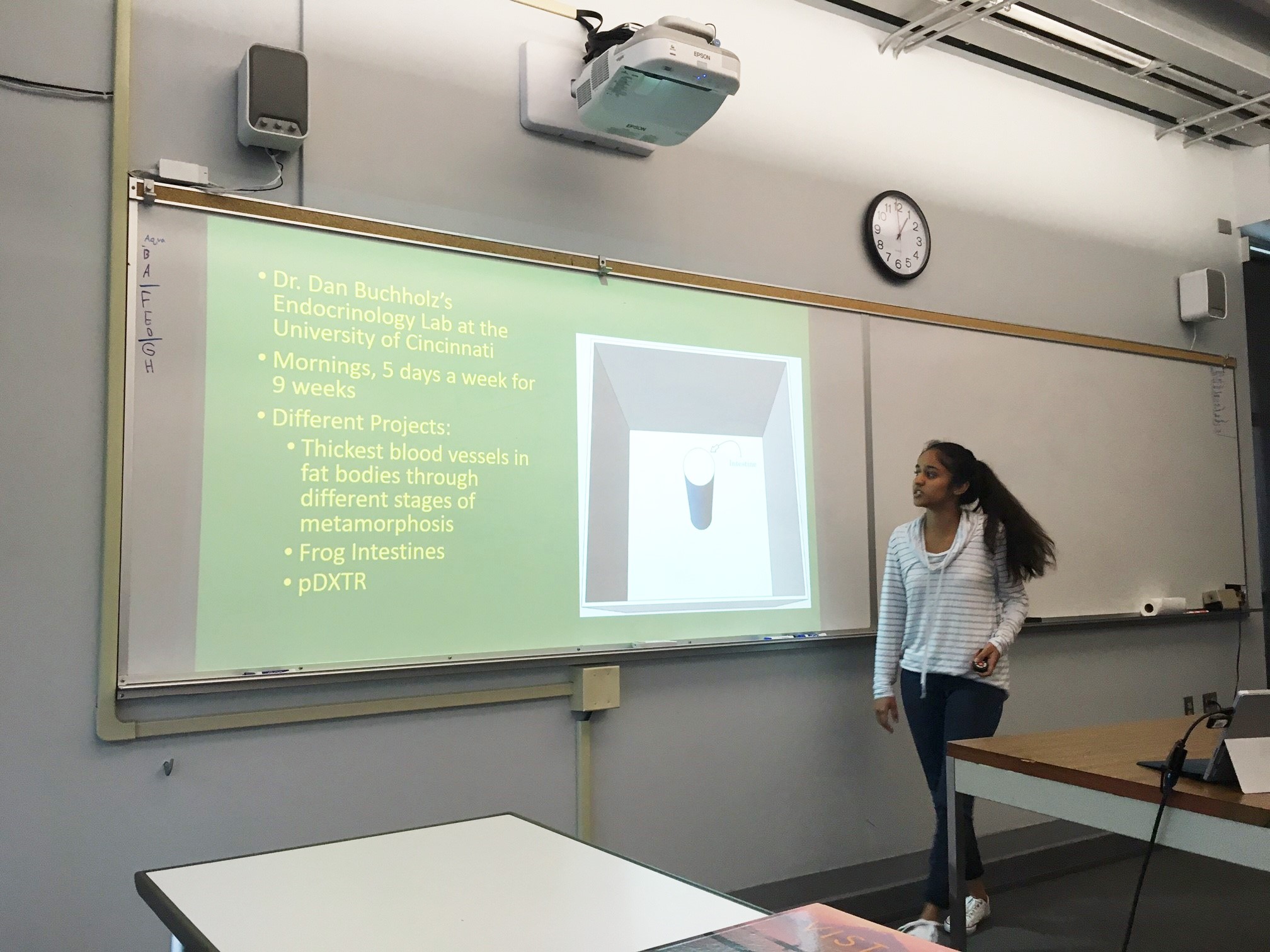 *Max DelBello '18 worked at UC and Children's in Department of Biomedical Informatics and with Dr. John Pestian and Dr. Brian Connolly in the Pestian Lab. His projects were related to computer science and included learning LaTeX, R/HTML and Bioinformatics (LitReview).

*Elizabeth Johnson '17 worked at a UC biology lab with Dr. Trinity Hamilton, assistant professor of biological sciences. Her focus was microcystis, a genus of cyanobacteria that produces toxins and is a common component of algal blooms. 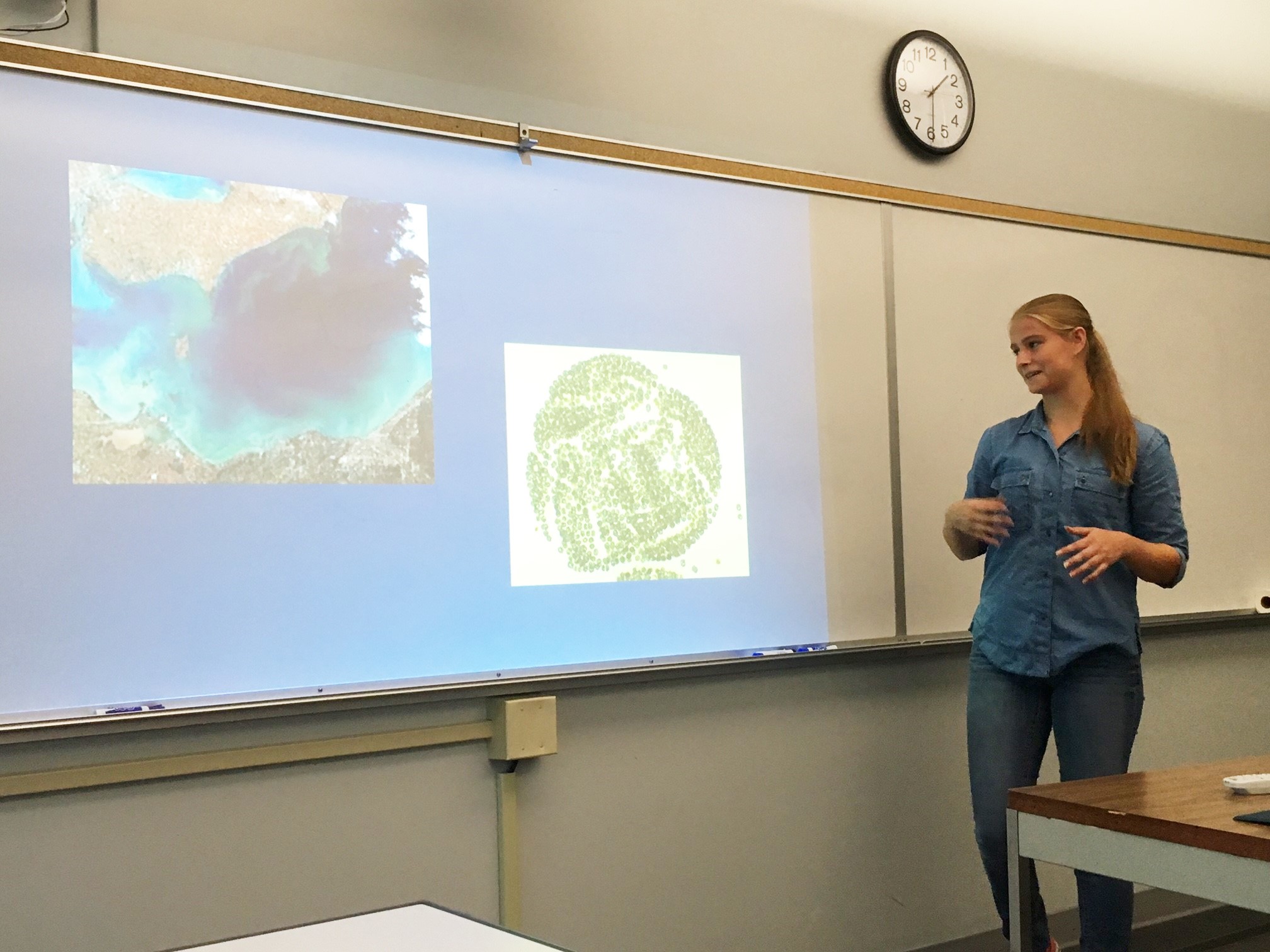 *Moya Ly '18 worked in the EDACS Lab in the Electrical Engineering Department, University of Cincinnati, with Dr Rashmi Jha and graduate student Thomas Schultz. She worked on chip microfabrication. 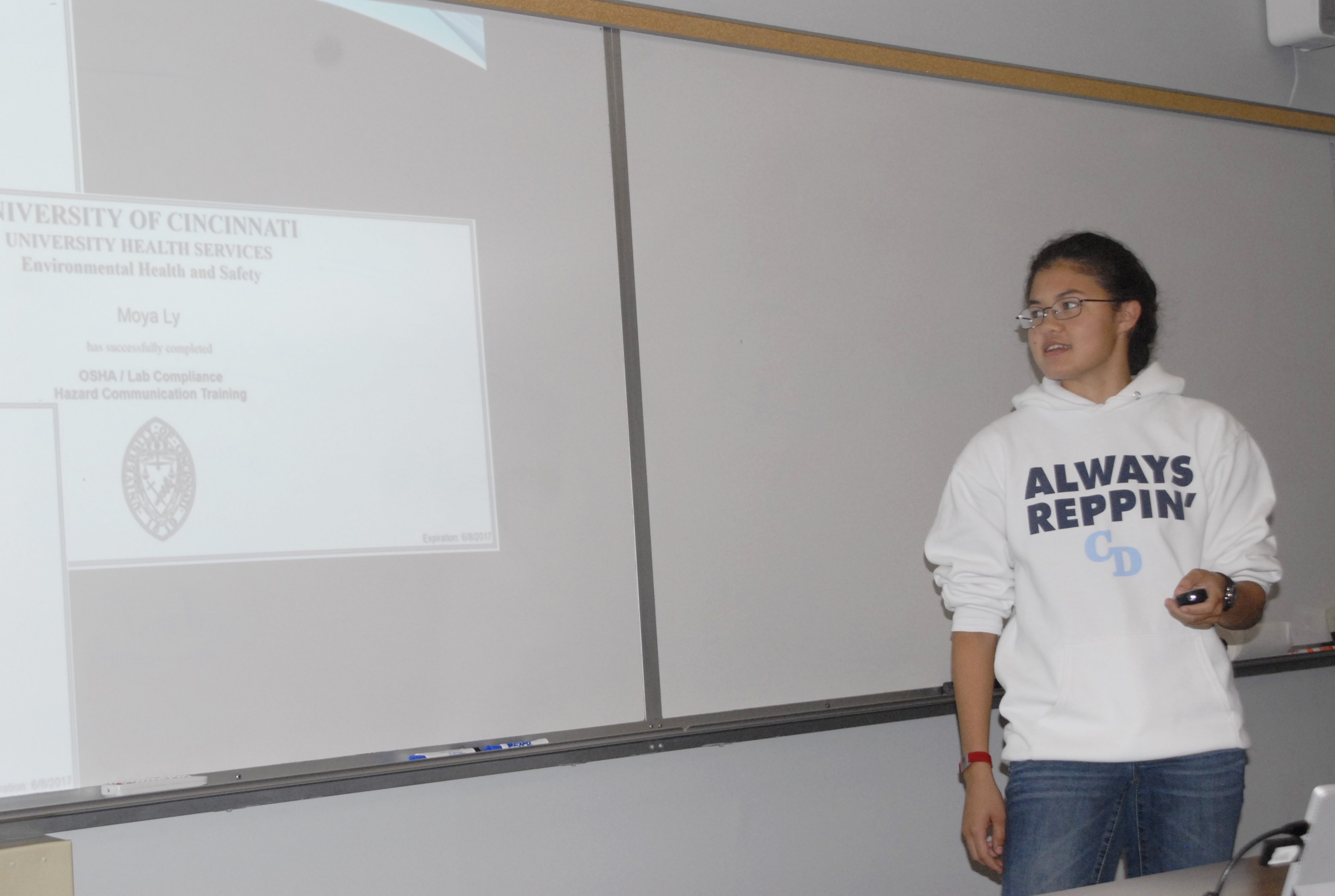 *Grace Pettengill '17 worked in Cincinnati Children's Hospital Medical Center's Heart Department with parent Dr. David Morales and Dr. Farhan Zafer. She shadowed Dr. Morales in surgery, as well as other doctors in the ECMO lab, in their rounds doing bioinformatics. She wrote a procedure checklist for Jehovah's Witness patients and an introduction to a chapter on muscular dystrophy. 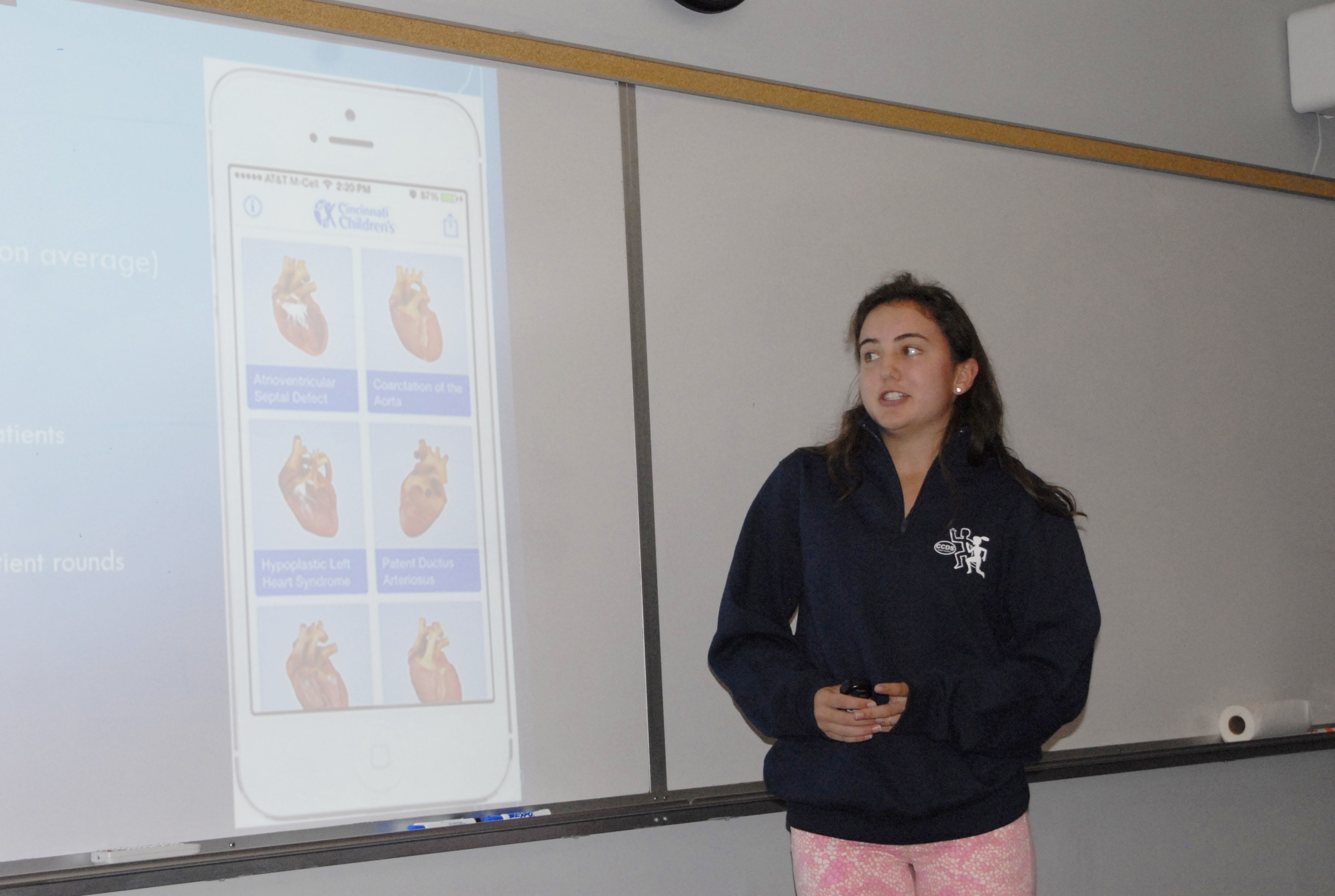 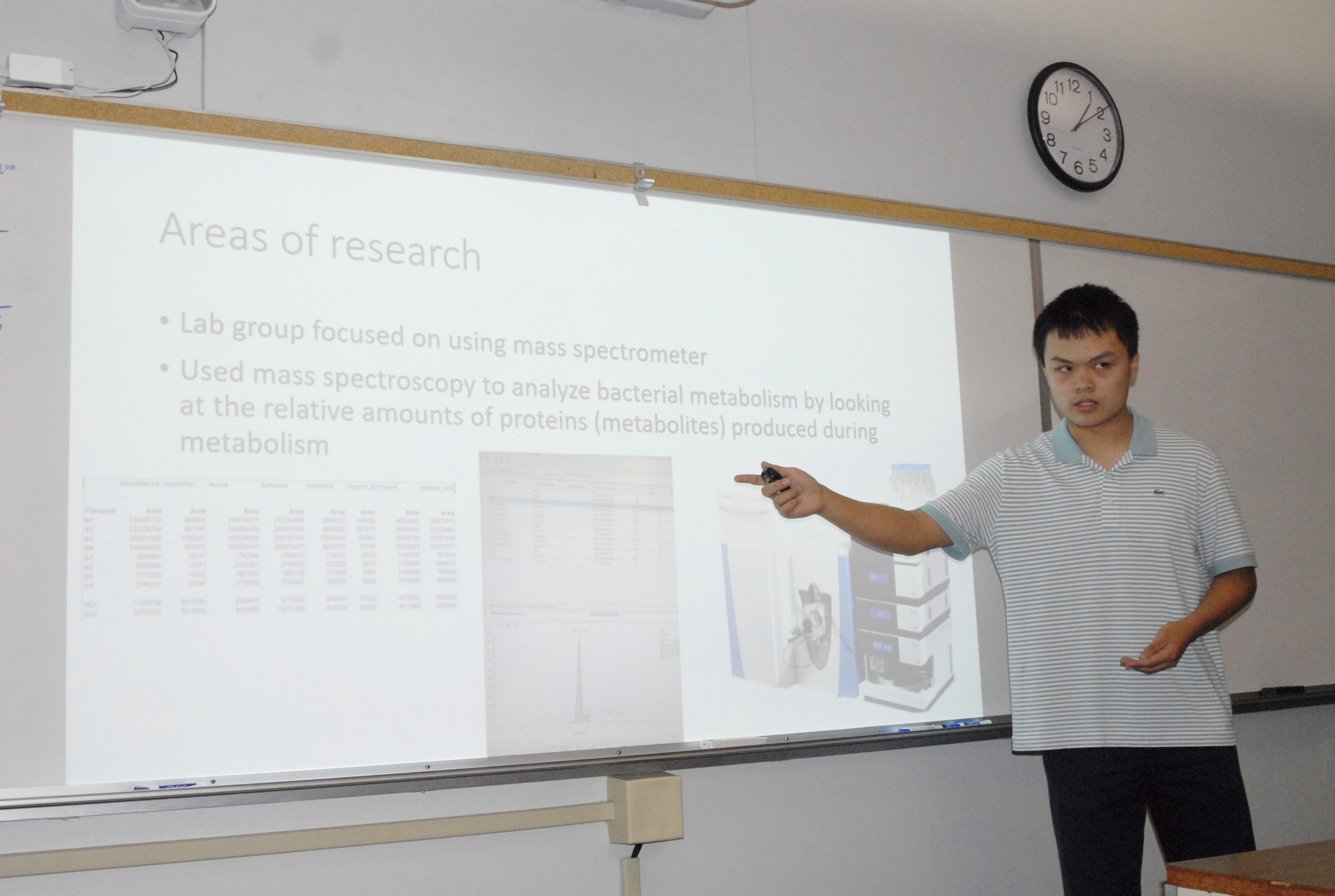 Tony focused on bipolar disorder and ADHS, which included running ANOVA using SPSS on the computer and observing the FMRI procedure.

Lorae learned how to do coding in UNIX and write scripts in another language to access the larger hospital database and convert fMRI data into a more usable form for "Region of Interest" (ROI) data analysis. She also learned how to interpret scores on common psychological tests for mania and depression. In addition, she learned the criteria and levels of various mental disorders diagnosable by an hours-long interview questionnaire (KSADS) that is used to do an overall psychological assessment.

Lizzie did bipolar disorder research, specifically the effects of lithium treatment on neurometabolite concentrations in the ventrolateral prefrontal cortices and the anterior cingulates of patients with bipolar disorder.